Home And Away Games

The idea behind the story really came from three different directions. I wanted to try and write a screenplay, and I saw an interview with Stockard Channing on cable about there not being enough good roles for older actresses to get play in popular movies today. So I started writing a screenplay with the idea of having as a protagonist a middle-aged woman.

At the same time I was traveling a lot around Ohio doing promos for My Cleveland Story and coaching football for John Carroll University. I think I hit every small town in the state, and really enjoyed meeting a lot of nice people. So I decided that I’d try to write an Ohio story to go with my Cleveland story.

Then suddenly in real life I was surrounded by single mothers. After giving birth to their fourth child, my ex-brother-in-law left my sister for some bimbo in Seattle (who he married and then divorced and then married someone else), and my friends Mary and Pam became unexpected widows. I had also dated a single mom or two over the years, and even had a long distance love affair for a while with an old friend on the east coast who was a single mom.

All this time I was working on my second novel A Poem on a Bar Room Wall, and I would work on my screenplay idea occasionally as a diversion. But I had trouble with the structure but really liked the story, so I figured I’d first right it out as a short story, thinking it would be 10-12 pages, but it ended up being a lot longer.

Although it is a lot different than My Cleveland Story, I really like Home and Away Games. Plus it gives me something I can use when teaching creative writing classes and seminars to high school students. I could never use My Cleveland Story for that because the kids would spend too much time asking my things like “How do you play bonging for buffaloes?” and “How much beer did you really drink in college?” Plus books are expensive, and putting a novella out in a smaller format at a reasonable price made one of my stories accessible to a lot of people who otherwise don’t have the money to buy newly released hardbacks. 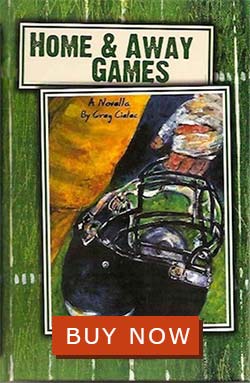 Another wonderful story from a master story teller.