Sonny and Emily sat opposite each other in the sandwich shop down the street from the high school. They finished unwrapping their lunches, and the small talk was over.

A year ago our daughter went through a bad period,” Emily started. “She acted like she was too cool to be a teenager, and she started hanging around with an older crowd, kids already out of high school. Lots of dopers and drinkers, lots of kids who never went off to college and who work shitty jobs and just hang around.” Emily talked very methodically, trying not to let too much emotion enter into her voice.

To make a long story short, she was at a girlfriend’s house one Sunday afternoon, without the parents home, and three of these losers showed up. The girls let them in. After splitting several quarts of malt liquor and a bottle of vodka, and swallowing several unidentified pills, her girlfriend went into her parents’ bedroom with one of the boys.”

Emily took a long pause, sipped her coffee, and paused again. Sonny sat there with an anxious “what happened next” look on his face. Emily continued.

“And then the two other boys pinned Gina down on the couch, whipped out their dicks, and persuaded her to accommodate both of them.”

Sonny pounded the tabletop hard enough to bounce both of their sandwiches in the air, spill over both cups of coffee, and get the attention of everyone in the establishment. Emily, without saying a word, walked over to the counter, grabbed a pile of napkins, brought them back to the table, and cleaned up the spilled coffee. She then resumed her story, in the same low, methodical voice. She kept her head down and did not make eye contact with Sonny.

Now listen, before I go any further, I’m going to tell you one thing and you better listen…don’t be critical of me. There’s a lot of shit work that goes with parenting, stuff you know nothing about. All our kids know of you are trips to Disneyland, afternoons on the beach, and that country-club-of-a-life you call training camp. I’ve done a good job raising our kids, a damn good job. But it hasn’t always been perfect or pretty.”

“Why are you telling me this now?”

Emily finally raised her head and looked Sonny in the eyes. “Because it gets worse. When Gina came home that night, she went up to the bathroom and swallowed a bottle of sleeping pills.”

For a moment Sonny looked like he was going to explode. He controlled himself, however, and Emily continued.

“Luckily, Craig was here for dinner that night. I sensed something was wrong, and found her on the floor in the bathroom. While I called for the ambulance he stuck his fingers down her throat and caused her to vomit.”

“And I’m lucky he was. I don’t know what I would’ve done without him.”

There was another long moment of silence as they both picked at their lunches. Then Emily spoke again. “There’s another reason we should all be grateful that Craig was there.”

“The newspaper pays someone that works in the emergency room to keep an eye on who comes in. That night it was a nurse that Craig knows. She never called the paper. Consequently, there wasn’t a story zipping across the wire services about a daughter of a pro coach trying to kill herself.”

“And why didn’t you at least try to call me in San Diego?”

“For one, you weren’t in San Diego. You guys were playing on Monday night in Seattle and we had no idea where you were. By the time you were back home on Tuesday she was back in school.”

“Why didn’t you call me then?”

Because we figured you didn’t want to be bothered. You guys got beat pretty badly in Seattle, Joe Montgomery separated his shoulder, and you had Denver coming up on Sunday. What would you have done from 3,000 miles away? You would not have come here.”

Sonny sat there simmering, but he knew she was right. “What did you do to punish her? Did you get her to a shrink?”

Actually, we did nothing. Sonny, she’s a good kid who made one big mistake. Believe me, she’s never going to make that mistake again. She’s learned her lesson, suffered enough. On one Sunday afternoon Gina went through her whole stupid stage. She has been the model kid since then, a good student, a good older sister to her siblings. And she never goes anywhere without first telling me. She stops into my classroom at least once each day, and she always calls, even if she’s going to be five minutes late.”

“What about her reputation? What do the kids at school think?”

“I don’t think that much of what really happened got out. And what did, got exaggerated and distorted so much it just faded away. Plus, these kids today, with all of them raised in divorced families, parents with problems and encounters with drugs and alcohol, no one leads the perfect life anymore. No one. You’d be proud of Gina of late. She’s really getting excited about going off to school next year.”

“Is she still talking about Florida State?”

“What about the boys involved?”

efore Emily could respond, they were approached by one of the ladies who was working behind the counter. For a moment, Sonny reached for the pen in his shirt pocket, thinking he was about to be asked for an autograph.

Mrs. Johnson, I just wanted to thank you again for helping Cindy with all that ACT paperwork. We really appreciate it.”

It was nothing, Mrs. Reynolds. I enjoy helping her. Just remember, get all that financial aid information back from your ex as soon as you can. Make sure you remind him the sooner in January he gets all his tax stuff together, the better.”

Sonny pulled the rental car in front of the school to drop off Emily and said, “Should I talk to Gina?”

What do you have to say?”

Listen, when she’s ready, you’ll be ready. Don’t talk to her if you have nothing to say, or if you’re not ready to listen to what she has to say. I think she wants to talk to you about it. Remember, it has been a long time since you were more a part of her life than just someone she sees on TV on Sunday afternoons.”

Emily had five minutes to spare before the bell rang for the next period. She rushed to the ladies’ faculty washroom, locked the door behind her, and sat down on the commode. She wanted to gather her thoughts before her next class, and she didn’t want anyone to see her shaking. 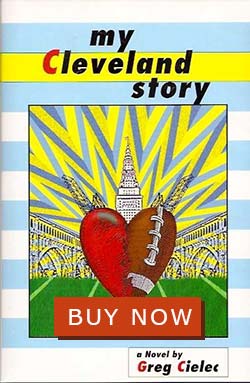 My Cleveland Story is a shot-and-beer novel, told with warmth, humor, nostalgia and ethnic blue collar rough-and-tumble truth. Goodness lives in this book.

Ohioana Quarterly, the Journal of the Ohioana Library Association

My Cleveland Story is like The Wonder Years…I found myself laughing, crying, and unable to put it down.

Scoop, The Blitz in Columbus, Ohio

Poetic and heroic, there can never be enough accolades for My Cleveland Story. You begin to understand what it felt like to have your first kiss with someone whom you had admired from a distance, or experience the loss of a truly loved one.